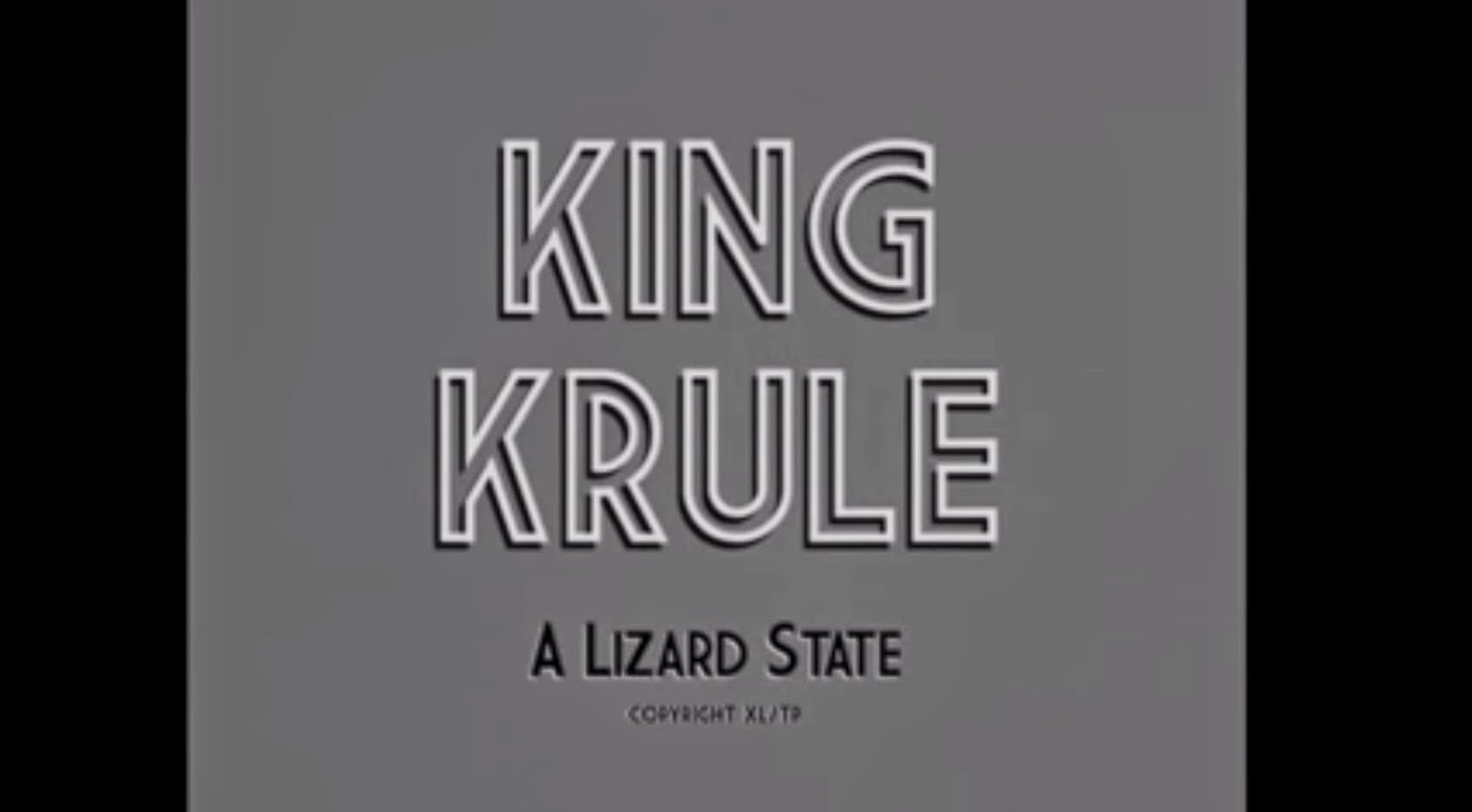 King Krule takes inspiration from Alfred Hitchcock's Alfred Hitchcock Presents in the music video for "A Lizard State". He includes clips from an episode the show to open and close the video, but also replicates them throughout the video itself.

King Krule's debut album, 6 Feet Beneath the Moon, was released in August of last year.
Posted by Joy at 2:29 PM No comments:

Ever since seeing Poliça live at The Southgate House Revival, I've become more obsessed with female-led synthpop. While Poliça may be the best entry in the genre (tied, perhaps, with Chvrches), several other bands have popped up as great examples.

Vaults is one of the latest bands to come around. So far, the band has released just a couple of singles, but were recently signed to Virgin EMI and will be putting out their first single for the label in early September!

When: August 9, 2014
Where: The Vogue Theatre in Indianapolis, IN

Future Islands made their network television debut in a now-famous performance on the David Letterman show back in March. The video of that performance, along with an NPR interview soon after turned me into a fan of the band almost overnight, and convinced me that their live performances could be nothing less than amazing.

I got my opportunity when the band announced their summer tour with dates in Indianapolis and Columbus. The morning of the Indianapolis show, I bought my ticket and planned for a evening drive to one of my favorite cities.

I drove to a friend's house who lives just a couple of miles from the venue. I decided to walk the rest of the way to The Vogue (get my steps in)! Though there had been many bands who played there in the past that I'd wanted to see, it was my first time actually being inside. The venue doubles as a dance club and had some lounging space to either side of the floor and two floors of bar and viewing space. 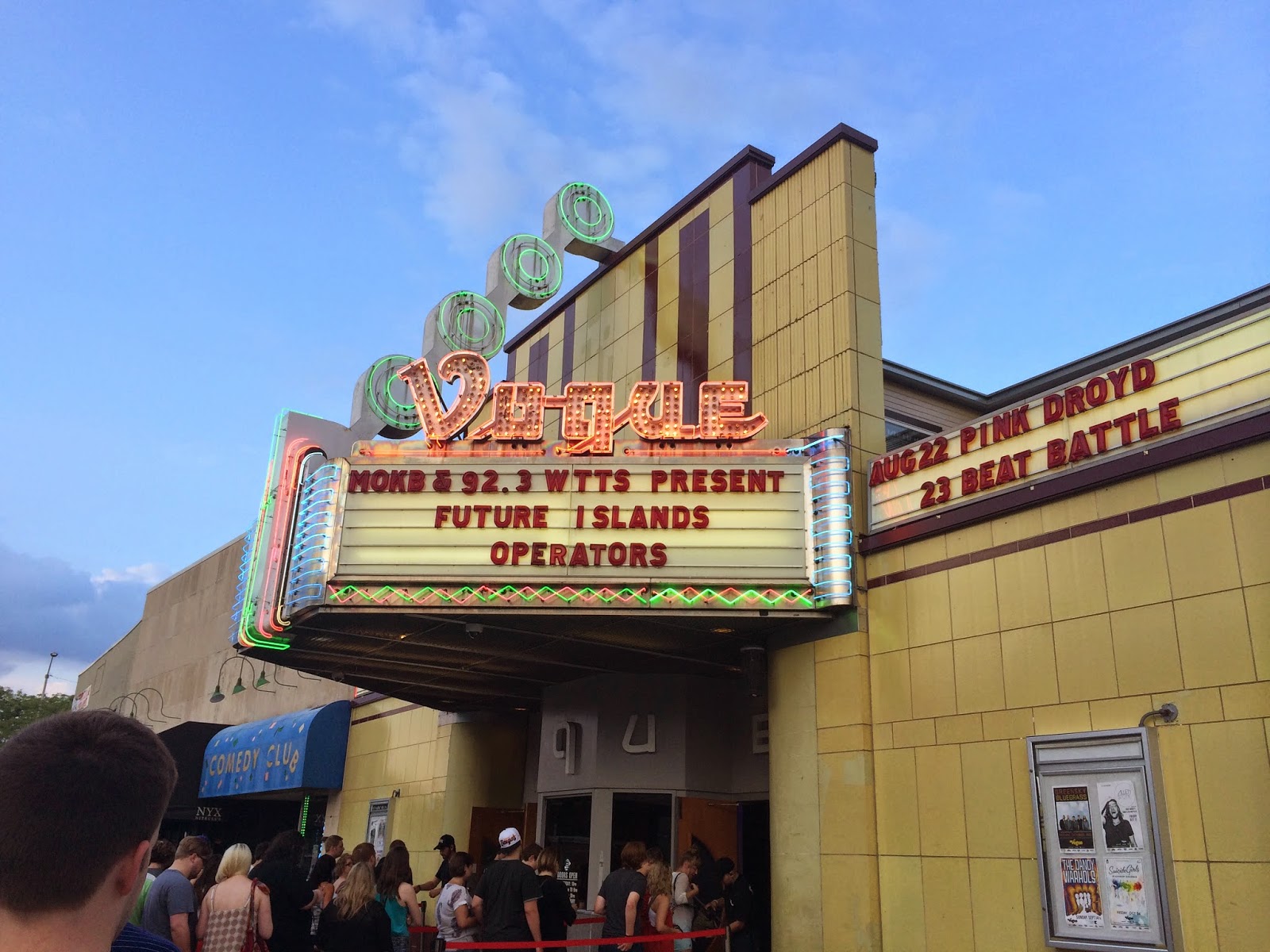 I was able to meet up with a friend at the concert who I only discovered was there when I Facebooked my presence at the show. His wife commented that I should look for him since he was there as well. It's always great to have a concert buddy!

The opening act was a new band named Operators, the new project of Dan Boeckner (of Wolf Parade, Handsome Furs, and Divine Fits). They performed a short set of songs from their debut EP. Boeckner seems to hit gold wherever he goes; this new band was incredible. Boeckner has a fairly distinctive voice that made their sound obviously his, but with synthpop undertones to replace the more guitar-driven sounds of his past bands.

Next, the main act came on. Sam Herring and company put on one hell of a show. He showed off some of the dance moves debuted on late night, and introduced some new ones, as well. I've also never seen a singer as interactive; he talked paragraphs to us, shook hands, and placed hands on shoulders. He was a joy to watch 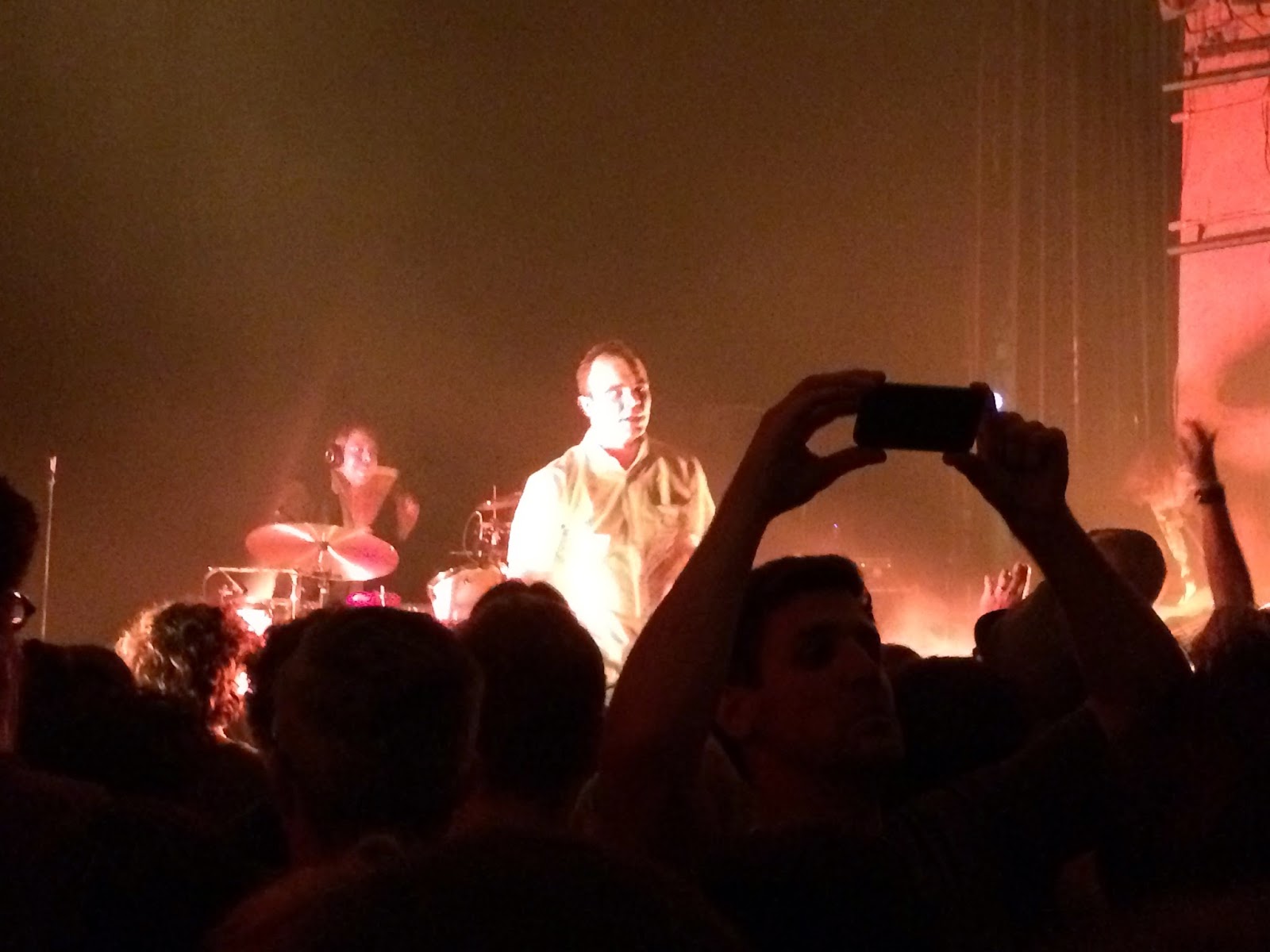 The band primarily performed from their most recent, Singles, but also played songs from their back catalog.

When: December 5, 2013
Where: Madison Theatre in Covington, KY

I first saw Animal Collective live in 2008 when they performed at the Pitchfork Music Festival in Chicago. It was around the time that Strawberry Jam was released. Following the performance, I tried, but failed to really get into their sound. It was wasn't until 2009's Merriweather Post Pavilion that I really started to appreciate the band (both current and previous work).

It would not be until late 2013 that I would get the chance to see them again, following yet another new album, Centipede Hz (2012). They had performed at Bonnaroo earlier that year, but it was one of those late late night shows and I was out like a light way before then.

Their Cincinnati/Northern Kentucky show had been postponed several times already by the time that they were able to make it out. It was initially scheduled for March, but was pushed back due to Avey Tare being sick. It was rescheduled to July, but was again pushed back, due to yet another illness. They were finally able to make it out in December and I'm sure all of the fans there were beyond ready to see them in action.

True to Animal Collective form, the setup of the venue was pretty trippy. Giant teeth adorned the ceiling (similar to the teeth on the cover of their most recent album) and everything seemed to be bathed in a black-light glow.

The opening act was bEEdEEgEE, aka Brian DeGraw (of Gang Gang Dance). His set foretold the weirdness that was to come; he performed his solo experimental electronic music beneath a bug tent. He put on a good show though, performing songs from his debut solo album, SUM/ONE. 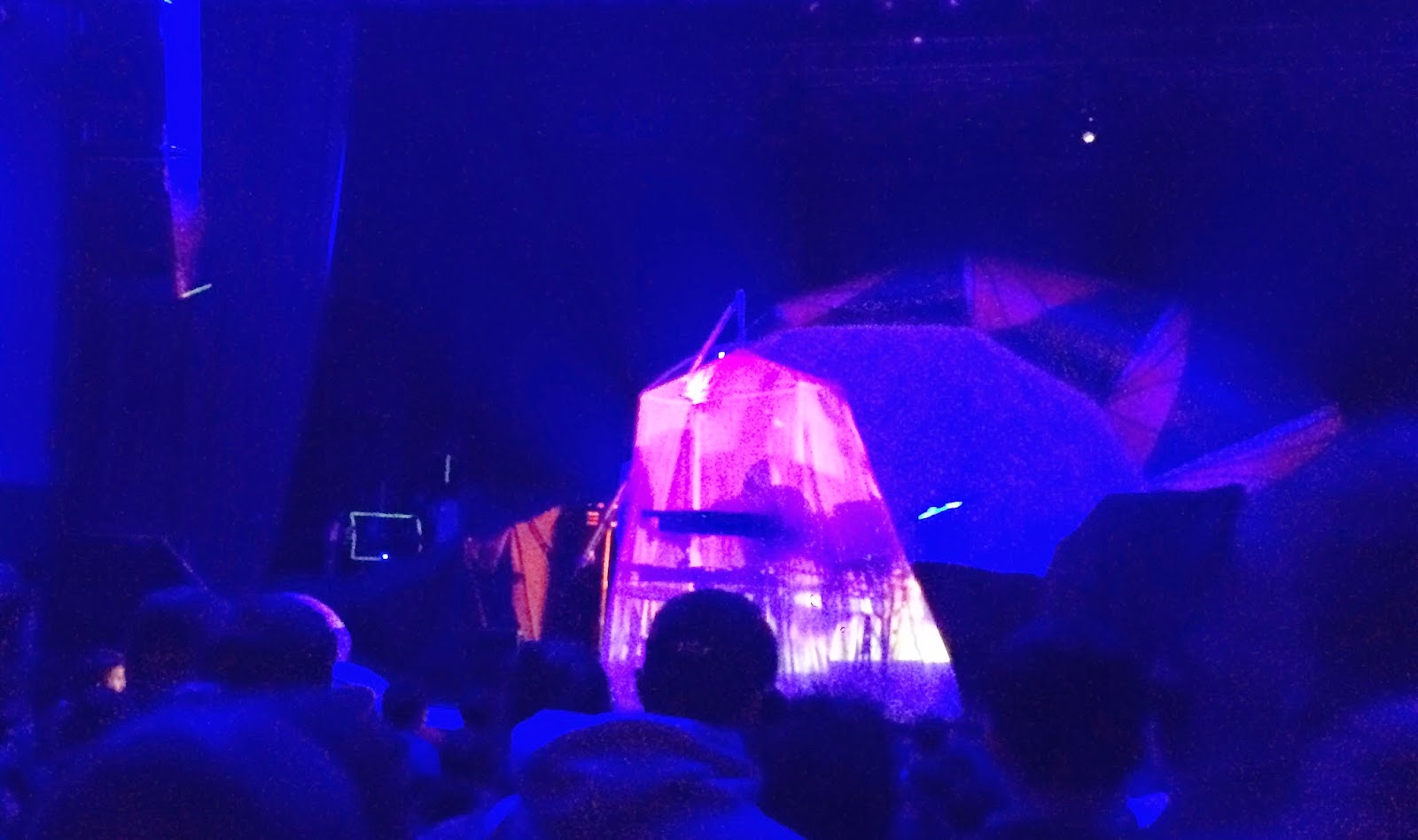 Next was the main act. They quickly proved that the teeth were for more than just decoration. In addition to images and colors being projected onto the screen behind the band, additional images were projected onto the teeth, making them even freakier. 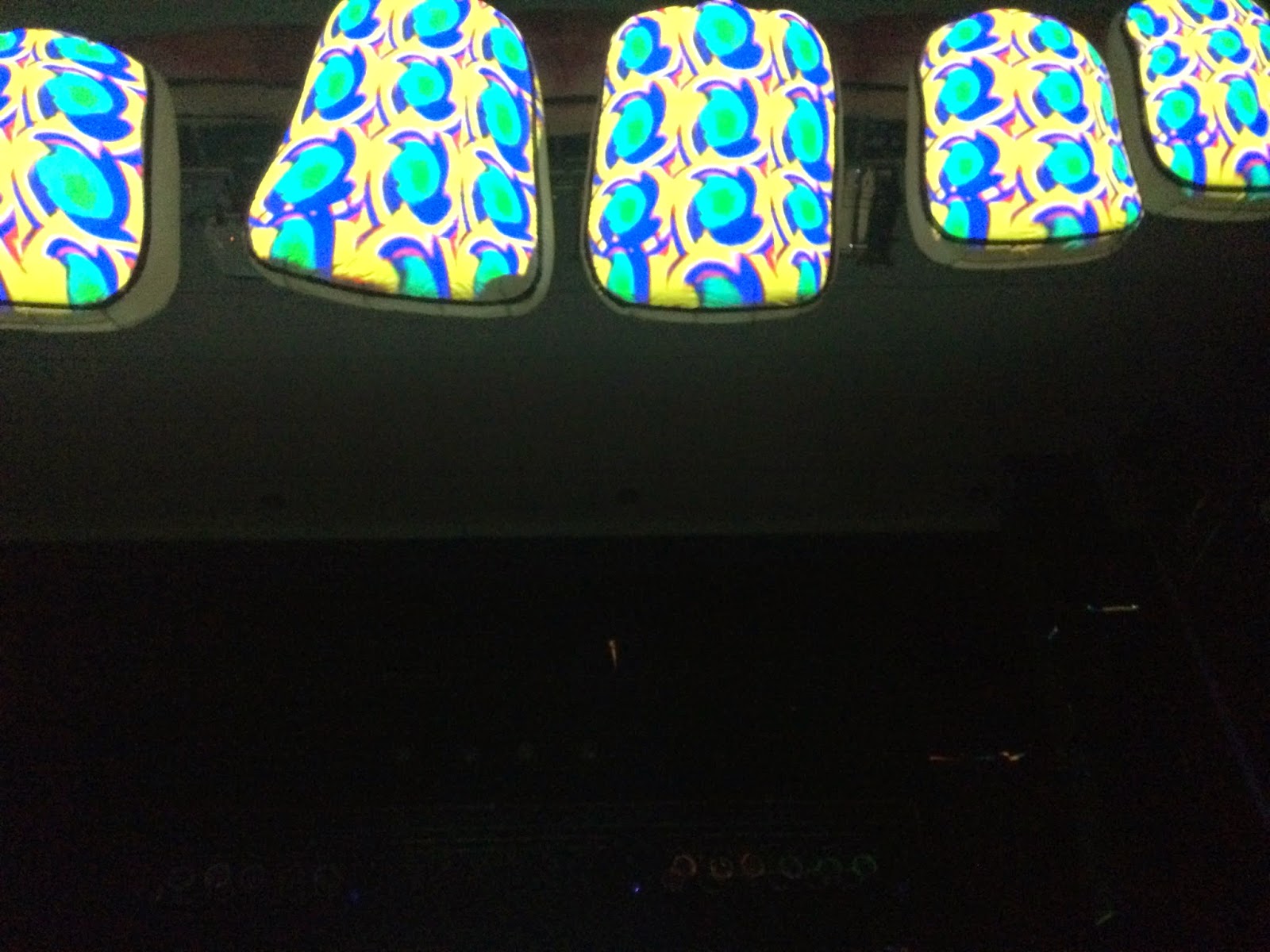 The band performed songs from throughout their catalog, but focused on their most recent release. They made the wait and numerous postponements well worth it; they put on an amazing show.

"Today's Supernatural" (from Centipede Hz)
"My Girls" (from Merriweather Post Pavilion)
"The Purple Bottle" (from Feels)
Posted by Joy at 11:03 AM No comments:

I bet this girl is swinging from the chandeliers right now! Sia (of Zero 7 guest vocals, Rihanna song-writing, and now number-one hit fame) married her beau, film-maker Erik Anders Lang, over the weekend. Details on the nuptials are few, in keeping with the singer's tendency for privacy, but we do know that she is no longer a single girl.

Sia released her latest album, 1000 Forms of Fear, earlier this summer, which included her biggest hit, to date, "Chandelier."