Starting in the late 1970s, the city of Manchester, England became a hotbed for indie music. Bands like The Smiths, Joy Division (and then New Order), and Oasis all got their start in the city. Halfway through the second decade of the new century, that traditional is still going strong, but now with some strong female voices. 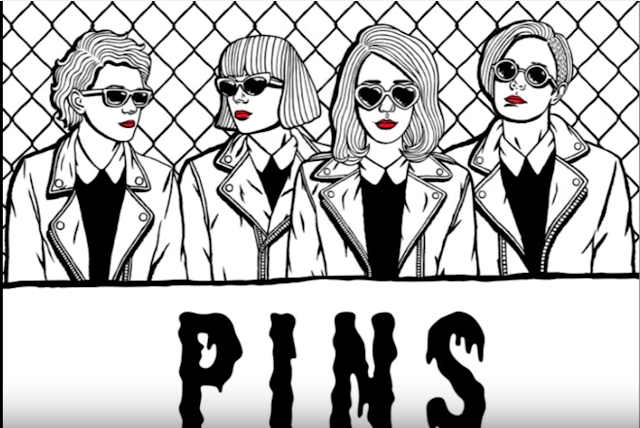 PINS got started in 2011 when photographer Faith Holgate was putting together a band and wanted an all-female ensemble. She found Lois McDonald (guitarist), Anna Donigan (bassist), and Sophie Galpin (drummer), and together, they released Girls Like Us in 2013 and followed that up with the spectacular Wild Nights in June of this year.

Holgate names other female-led bands like Hole and My Bloody Valentine as inspirations, but I am most drawn to a similarity between Holgate and the lead vocalist of another British band, Liela Moss of The Duke Spirit. Neither have particularly deep voices, but share a lilting huskiness to their singing. PINS certainly carries on the strong indie "Madchester" tradition of their home, while making 2015 a very strong year for female performers and all-girl bands!

Email ThisBlogThis!Share to TwitterShare to FacebookShare to Pinterest
Labels: PINS