Bird released his most recent album, Break It Yourself in March of this year. Hands of Glory is meant to serve as a companion to that release, featuring re-recordings of songs from that album, as well as covers of classic country and bluegrass tunes.
"Three White Horses"

Friedberger is mainly known for his work with sister Eleanor as The Fiery Furnaces. It's been some time since the most recent release from that project and, in the meantime, Eleanor has released her first solo album, Last Summer, last summer (literally). Matthew has been considerably more prolific as a solo artist, having released twelve albums (including this one), with ten in just the past two years!
"Expectant Fathers - In for a Surprise VII. As If in the Car with the Kids" This new rock collaboration features Akron's Joseph Arthur, bassist for Pearl Jam Jeff Ament and Richard Stuverud. The three met 13 years ago when Arthur opened for a project featuring Ament and Stuverud. It took all this time, though, for that friendship to yield a musical result.
"Modern Times"

Cee-Lo gets into the holiday spirit, featuring Christina Aguilera, Rod Stewart and The Muppets.
"This Christmas"

Holy Ghost - "It Gets Dark" single From Gainsbourg to Lulu 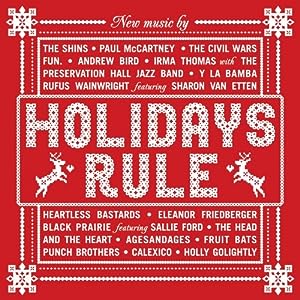 The Man with the Iron Fists soundtrack