Is it too little too late?

MySpace has made a lot of changes lately, from almost to completely revamping profile pages to reorganizing its homepage to a more Facebook-esque design. Now, the news is that the site would like to change its focus from being just a social networking site to being an entertainment network by focusing more on allowing users to organize their favorite music, TV shows and movies. In a way, as I interpret it, moving from being user profile-driven to being fan page-driven. They're hoping this change will allow MySpace to stay relevant given the greater popularity of Facebook and Twitter and differentiate it from those other sites. 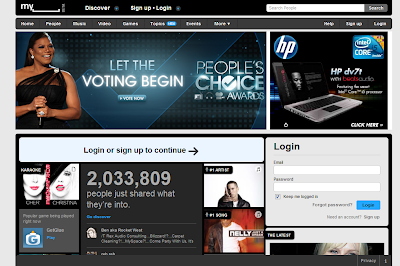 I, personally, like the idea. Just in terms of music, I prefer MySpace to everything else; personal band sites, Facebook pages, iTunes' Ping. When I'd like to find out more about a new artist, MySpace is the first place I go to because I know I'll be able to easily find what I'm looking for. I can easily find out who's in the band, how they describe their sound and who they're influenced by without having to read through a long band biography. And, because of MySpace's in-built music player, I can listen to their music while reading up on the band without having to open a new tab or window. While Facebook pages also allow for a music player, I like the size of Myspace's and that it's organized more like an external music player, such as iTunes or Windows Media Player. Another benefit of MySpace over Facebook for musician pages, something that I hated about MySpace for personal pages, is the ability to personalize the page. For bands, personalization allows to further the band's brand and not be locked down into a specific color scheme or format.

Apple's Ping application is just about pointless, in my opinion. I read recently that it had millions of users (probably just counting all people who have iTunes accounts) but only around 2000 artist profiles. Even if every artist that sells through iTunes creates a page, its reach would still very limited. Would artists that can't sell on iTunes, like Girl Talk, be able to maintain pages on Ping? Would newer artists who are still in the process of recording and getting their names out their be able to maintain pages? A big part of me thinks no. Also, iTunes would never allow for full song previews even through their pages, it would still be the 30 second listens.

MySpace already provides a good, standardized platform for musician pages. If it's going to pursue this refocus, there certainly are some things that I think it could do better:

1) Separating friends into fans and musicians. Musicians can add both users and other musicians as friends on MySpace. It would better to separate user accounts and band accounts in the friends list. Perhaps turning user friends into fans.

2) Do something about how pictures are organized. It's difficult to view pictures on MySpace.

This is apparently MySpace's last ditch effort. If it fails to produce results, Rupert Murdoch may be done with the site.

As we speak, there is a joint announcement between Facebook and MySpace going on. I don't know if it relates to this proposed revamping, but I'll keep you updated if this is related.
Posted by Joy at 9:26 AM