I've been excited about the St. Paul-based band Hippo Campus ever since I saw them on the most recent season of A.V. Club's Undercover; they masterfully performed ELO's "Don't Bring Me Down." I checked out their own work and was equally impressed by what they were able to write and arrange for themselves. They're only two EPs into their career, but have already produced some amazing tunes.

They've been touring this year to support the release of both EPs and stopped by the Cincinnati area to play at Madison Live, a new venue established by the owners of Madison Theatre in Covington, KY. It's right next door to the other venue, but serves smaller crowds.

I got a pleasant pseudo-surprise when we got to the venue that night; the opening band was another young group from Minnesota who I had been impressed by lately, Bad Bad Hats (I had forgotten that they were touring together until just then). The band played primarily from their debut album, Psychic Reader, released earlier this year. Their simple, sometimes humorous, indie pop sound was punctuated by a sort of absurd, dry humor from lead singer and guitarist Kerry Alexander. 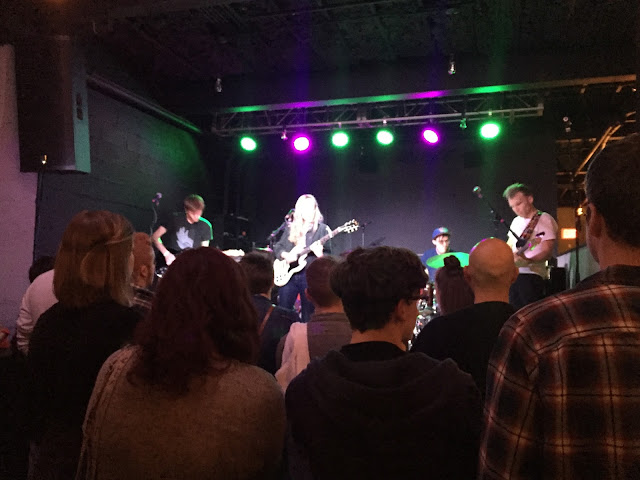 After a great first set, Hippo Campus came on. Their style was a lot more upbeat (think Vampire Weekend, JR JR, or They Might Be Giants), and their lead singer, Jake Luppen, had a goofier onstage attitude to match. They're an impressive band, especially for a group so young (they graduated high school two years ago). It turned out to be a interesting show to attend; the venue and crowd were fairly small, but the fans were really into the band and some of the girls in the audience were definitely swooning over the boys (though I must admit, Jake was pretty cute).

I'm starting to realize that a lot of the bands that I'm getting into are made up of members much younger than me, which can be a bit strange. But it is exciting to see such an amazing amount of talent coming from those artists, these two bands are just the tip of the iceberg!